Figuring out how a coffee shop should look seems to have been pre-determined by some chain from the Pacific Northwest, the one that invaded each and every nook of the U.S.  By god, every coffee shop looks the same, with varying levels of sophistication.  You have hardwood, earthen colors, muted art, and some big cushy couches and/or wiry chairs/bar stools.  One would think that coffee could only be had by early 19th century bohemians.  Even then, philosophers and hipsters drank coffee alike because they thought they were getting high, or at least expanding their mind.  This doesn't exactly conjure up images of your average Starbucks.  Say what you will about Chipotle's décor, but at least they tried something different with their somewhat brutalist aesthetic.

I think that my caffè would have to match my heightened idea of coffee.  My shop would have a lot of mid-century modern influences because of that school's penchant for odd curves and illustrious colors. It would still be elegant, but in a way that's completely different from most coffee shops.  You'd still have simplicity, tons of space, clean lines, and lots of light.  To give you an idea of how things would be arranged, think about the lairs of James Bond's enemies.  Clearly, Dr. No should have gone to work as an interior designer.  As for layout, I think that a centralized bar with space to sit around it would be a lot more appealing than having the bar off to the side.  Seating should be sparse, but comfortable.  Ideally, most folks will be standing alongside the coffee bar enjoying their espresso and a small pastry.

Speaking of pastry, it'd be a central item in my caffè.  The food items on my menu would have to be light and a complement to coffee.  For as much as I love chocolate cake and black-bottomed cupcakes, there are a ton of bakeries that do it better than your average coffee shop (who usually have to have it delivered).  These heavier-type pastries would have to be excluded.  Again, the focus is coffee.  At one extreme, I'd have a light brioche with a custard filling, and at the other, a thin crunchy ginger snap.  In my experiences, both fare well with coffee. Small portions (think very small) of chocolate and cheese have also done well.  Both would find their way on to my menu.  Keeping light in mind, I wouldn't serve sandwiches or other meal-type fare. As for beverages, I would offer up drip (iced drip and au lait, too) along with a number of espresso-based offerings including espresso (duh), macchiato, cappuccino, latte, and mocha.  Flavored syrups would also be on-hand, and geared towards enhancing one of the aforementioned beverages (cherry, vanilla, caramel, etc...).  Ideally, I'd be making these in-house out of the highest quality ingredients available. Anyway, this comprises an abbreviated look at my caffè's menu. 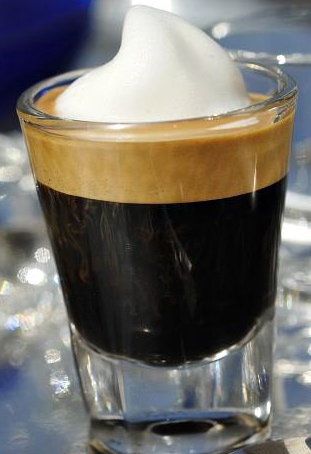 There you have it... Coffee and style operating in harmony.