Converting people from instant to the "good stuff"

My aunt stopped by a few days ago to pick up my father - they were going up north for the weekend. My dad had his travel mug ready (with the coffee level going down at a steady pace). My aunt spilled her travel mug as she was getting out of the car (she had her two dogs with her and was trying to untangle their leashes so they could stretch their legs before the four hour trip). My aunt asks if I can boil some water for her as she brings out the instant coffee she is taking up north with her.

I am not just going to boil water and let her take instant. Instead I make a pot of Spectacled Bear Colombian Supremo.

I do not tell her that I did this - I just made the coffee then refilled her mug (and my dad's mug). She takes a sip and looks very surprised. I tell her what she is drinking. Instead of the blah she was used to she has smoothness. Instead of vaguely coffee flavored water just off the boil she was drinking real coffee. Coffee with subtleties, nuances and a pleasant aftertaste.

My aunt said that she usually drank instant because she did not drink that much coffee. I told her that is why she should drink the "good stuff". She should treat herself and enjoy instead of just settling. Even the "best" instant (is that a contradiction in terms?) cannot compare to real coffee. (I also told her about roaste.com as a good place to review and start her coffee search). I also ground enough coffee for her and my dad to take with them for the weekend.

My aunt is the second person I have "converted" from instant.  My grandmother had also been drinking coffee. In her case it was because it was "easier". I sent her some of the Spectacled Bear and asked that she try it. She was reluctant. Colombian coffee in the past has given her an upset stomach. She was happy with this one though. She enjoyed it very much. Again I pointed out that she should not just settle for a quick instant. Take time and enjoy a real cup of coffee. She deserves it!

Now to assimilate the rest of the instant drinkers. I am sure there is a place somewhere for instant. Just not in my cup!! 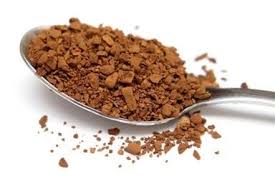